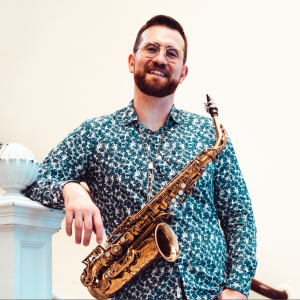 Heralded as a premiere saxophonist of his generation, Boston-based jazz saxophonist Nicholas Brust (pronounced “Bruhst”) has established his voice in the world of modern instrumental music. He has found his niche as a bandleader and composer, taking advantage of the numerous textures and combinations available in small-group improvised music. While Nicholas has performed with numerous highly acclaimed musicians while in NYC, he makes a priority of working with up-and-coming talent that he believes in. Nicholas is currently on faculty at New England Conservatory and Elefante School for the Performing Arts in addition to maintaining a private studio.

Nicholas released his debut full-length album, Frozen in Time, with Fresh Sound Records in October 2020. The album features exclusively original material composed by Nicholas and has received international critical acclaim from All About Jazz, Jazz Journal UK, Modern Jazz Today, Rootstime Music, and the Jazz Quad among numerous others. The album has been described as “a very impressive piece of work from a saxophonist whose grasp of tone colour makes him immediately distinctive and listenable” (Brian Morton, Jazz Journal UK). Marc Philiips of Part-Time Audophile exclaimed, “It’s as if one of your favorite movie stars from long ago suddenly started telling you about all the secrets of the universe.”

Nick released an EP of original music entitled 'Brooklyn Folk Songs' in January 2015. Brooklyn Folk Songs “showcases a set of original compositions that infuse sturdy melodies with a rich, contemporary harmonic palette...like the borough for which it’s named - encompasses a variety of moods along with its own unique accent” (David Kastin). Since then Nick has continued to showcase his compositional and improvisational talents in a series of videos that can be found on his Youtube channel.

Nicholas has many influences, but the most prominent voices that have influenced his style in recent years are Michael Brecker, George Coleman, Robert Glasper, Kurt Rosenwinkel, Kenny Garrett, Roy Hargrove, Frank Strozier, and Bob Berg.

“Gliding over the expansive harmonies, incorporating every note into melodic, often singable phrases…most welcome to the ear.” (John Pietaro, The NYC Jazz Record)

"Nick Brust’s playing and writing is evidence that the future of the alto saxophone is in good hands. Rarely do you find a young player who combines exquisite, head-spinningly dextrous playing with such thoughtful ideas and compositions. Check him out!" (Will Vinson)