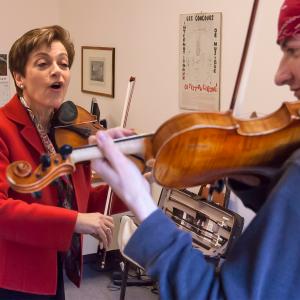 Miriam Fried has been recognized for years as one of the world’s preeminent violinists. A consummate musician—equally accomplished as recitalist, concerto soloist or chamber musician—she has been heralded for her “fiery intensity and emotional depth” (Musical America) as well as for her technical mastery. Fried has played with virtually every major orchestra in the United States and Europe and has been a frequent guest with the principal orchestras of Boston, Chicago, Cleveland, New York, Philadelphia, and Pittsburgh, as well as with the Israel Philharmonic, the London Symphony, the Royal Philharmonic, and the Vienna Symphony.

Recital tours have taken her to all of the major music centers in North America and to Brussels, London, Milan, Munich, Rome, Paris, Salzburg, Stockholm, and Zurich.

Since 1993, she been chair of the faculty at the Steans Institute for Young Artists at the Ravinia Festival, one of the country’s leading summer programs for young musicians. Her involvement there has included regular performances, including recitals and concerts with the Chicago Symphony. Fried’s highly praised 1985 New York recitals of the complete Bach Sonatas and Partitas for solo violin were the culmination of three years of international performances. She returned to this music with a recording made in France for the Lyrinx label. She has also made a prize-winning, best-selling recording of the Sibelius Concerto for the Finlandia label with the Helsinki Philharmonic under the direction of Okko Kamu.

Chamber music plays an important role in Fried’s musical life. She was first violinist of the Mendelssohn String Quartet until it disbanded after 30 years, and has collaborated with such distinguished artists as Isaac Stern, Pinchas Zukerman, Garrick Ohlsson, Nathaniel Rosen, her son, pianist Jonathan Biss, and her husband, violinist/violist Paul Biss. She has been featured guest artist at Chamber Music East in Boston, the La Jolla Chamber Music Society SummerFest, the Lockenhaus Festival, and the Naantali Festival in Finland.

Miriam Fried’s successful solo career was launched in 1968 after she was awarded First Prize in Genoa’s Paganini International Competition. Three years later she claimed top honors in the Queen Elisabeth International Competition, where she gained further world attention by becoming the first woman ever to win the prestigious award. Her early childhood included lessons with Alice Fenyves in Tel Aviv, as well as the opportunity to meet and play for the many great violinists who visited Israel, including Isaac Stern, Nathan Milstein, Yehudi Menuhin, Henryk Szeryng, Zino Francescatti, and Erica Morini. She came to the United States as a protégée of Isaac Stern, and continued her studies with Ivan Galamian at the Juilliard School and with Joseph Gingold at Indiana University.

What We Do
Next
Prev
Tags
CollegeStringsViolin
Top