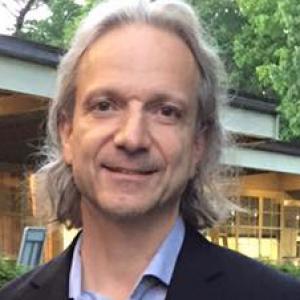 Michael Gandolfi has a broad range of musical interests encompassing not only contemporary concert music but also jazz, blues and rock, by which route he first became a musician. The span of his musical investigation is paralleled by his cultural curiosity, resulting in many points of contact between the world of music and other disciplines, including science, film, education, and theater.

Mr. Gandolfi has had long-standing relationships with the Atlanta, Boston, and Memphis Symphony Orchestras, Boston Modern Orchestra Project, the Grant Park Orchestra and the Boston Musica Viva. His wind ensemble works are now a mainstay of the band repertoire and are routinely heard around the world.

Mr. Gandolfi chairs the composition department at the New England Conservatory of Music, is Head of Composition at the Tanglewood Music Center, and has been a faculty member at Harvard, Indiana, and Boston universities.

Next
GANDOLFI Flourishes and Meditations on a Renaissance Theme - "The President's Own" U.S. Marine Band
Y2K Compliant: I. Short Circuits
The Garden of Cosmic Speculation: The Willowtwist
From the Institutes of Groove: II. Rising on the Wing (Perpetuum Mobile)
Prev
Tags
CollegeComposition
Top