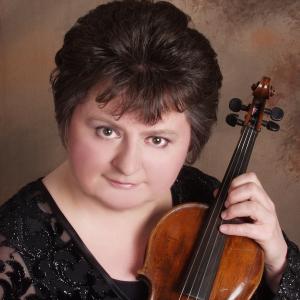 Originally from Poland, Magdalena Richter has appeared as soloist with the Warsaw and Cracow Philharmonic and in the US with the Boston Pops, Cape Ann Symphony, the Nashua Philharmonic, Wellesley Symphony and Symphony by the Sea among others. “Violinist Magdalena Suchecka Richter is a virtuoso of her instrument, an artist of great, yet well controlled temperament,”- from the Copenhagen newspaper the Svenska Dag Bladet, in a review of her performance of Bacewicz Solo Sonata.

Richter is also a very devoted teacher and serves as a Chairman of New England Conservatory Preparatory School String Department and Rivers School Conservatory String Department. In May 2009 she was awarded the prestigious Jean Stackhouse Award for Excellence in Teaching at NEC Preparatory School. She is also a Director of the Rivers School Chamber Orchestra. Her students are very involved at NEC and BYSO youth orchestras as well as District, All State, All Eastern and National Orchestras, often serving as section leaders. Her students are also winners of concerto competitions in Boston area and many of them became professional musicians.

As a solo recitalist, Richter has presented concerts at the National Radio House, Paris, France, the International Cultural Center, Leipzig, Germany, at the Sibelius Academy of Music, Helsinki, Finland and Warsaw Symphony Hall, Poland. Now settled in the Boston area, Richter has performed on various concert series: at Jordan Hall, the Gardner Museum, Edward Pickman Concert Hall and St. Paul’s Church. She also participated in hundreds of concerts-presentations for school children both in Poland and US.

Born to a family of professional musicians, Magdalena Richter began her concert career playing with her parents. She studied first at the Academy of Music in Warsaw, where she earned her diploma with highest honors and joined a faculty. She continued her studies in US at Boston University and Longy School with Roman Totenberg. Richter holds her Master of Music degree from Juilliard School, where she was a scholarship student of Dorothy Delay, earning the Extraordinary Student of America Award.