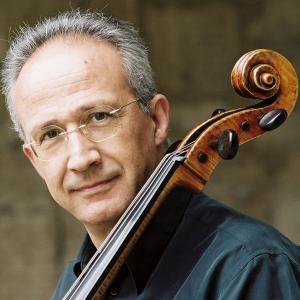 Born in 1951 in Andorra la Vella to exiled Andorran parents, Claret began his musical studies at the age of nine. In 1964 he moved to Barcelona, Spain, where he won major distinctions at the Conservatory of the Liceu, and began working with Enric Casals. He continued his studies in France, Italy, and in the United States, with masters such as Maurice Gendron and Radu Aldulescu. Claret has said that his personal meetings with György Sebök, Eva Janzer, and Bernard Greenhouse were also implemental in the development of his artistic personality. Claret’s professional career was launched into the international spotlight after he took first prizes at the Pablo Casals International Cello Competition in 1976 and the Rostropovich Cello Competition in 1977.

Chamber music, pedagogy, and a great interest in contemporary music are all essential elements of Claret’s musical focus. His previous teaching posts include the "Victoria dels Angels" Music School at Sant Cugat in Barcelona, and the Toulouse Conservatory in France. He currently teaches at the Conservatori Superior de Música del Liceu in Barcelona, and has presented masterclasses in France, Portugal, Belgium, Italy, the U.S., Japan, and Korea. Also, together with Bernard Greenhouse he conducted seminars at the Abbey of Fontfroide in Narbonne, France.

A consummate performer, Claret has been on stage in the principal capitals of Europe, America, and Asia. Under the baton of Vaclav Neumann, Mstislav Rostropovitch, Pierre Boulez, Karl Münchinger, Dimitri Kitaienko, Sakari Oramo, George Malcolm, and many others, Claret has performed with orchestras such as the Washington National Symphony, Moscow Philharmonic, Hungarian Philharmonic, Czech Philharmonic, English Chamber Orchestra, and the French National Orchestra. He has also performed with notable orchestras in Tokyo, Seoul, Düsseldorf, Stuttgart, Bamberg, Moscow, Madrid, and Barcelona. In 1980, he founded the Barcelona Trio, which performed for nearly 15 years. He regularly plays with pianists Josep-Maria Colom and Benedicte Palko and has collaborated often with prestigious musicians such as Henri Dutilleux, Witold Lutoslawski, Krzysztof Penderecki, Joan Guinjoan, Iannis Xenakis, and Pierre Boulez.

Next
No video provider was found to handle the given URL. See the documentation for more information.