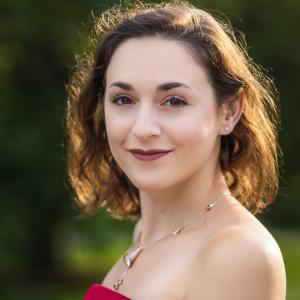 This past 21-22 season, Jessica performed as a Finalist for the 2022 Lucine Amara Art Song Competition, and made her Carnegie Hall debut with Vincerò Academy at their 2022 Gala Concert, where she sang excerpts as Susanna from Le nozze di Figaro and Marie from La fille du régiment, respectively, under the direction of Maestro Abdiel Vàzquez.

In 2021, Jessica appeared in Dell’Arte Opera Ensemble’s out-door opera-concert of Die Entführung aus dem Serail by Mozart as Blonde, and sang with Music On Site Inc. as their Amahl cover in Amahl and the Night Visitors and Opera Scenes Showcase. In addition to her role debuts, Jessica premiered the first song of the new song cycle, We Will Outlive Them, Letters to Rivka from Galicia composed by Quinn Gutman, at the Boston Festival for New Jewish Music. The cycle is still being workshopped, and she looks forward to premiering the rest of the work at a future date. She also premiered Dana Kaufman's Three Beasts, adapted for piano and voice with the Christman Opera Company.

Past performance credits include originating the role of Miss Johnson in Douglas Buchanan’s World Premiere of Bessie and Ma; covering Belinda in Dido and Aeneas; Amalia Balash in an outreach production of She Loves Me; Titania in Paul Richards The Loathly Lady with Hartford Opera Theater's New in November Nine Festival; Noèmie in Cendrillon, Suor Genovieffa in Suor Angelica, Nella cover in Gianni Schicchi as a Renee Greenberg Emerging Artist with Opera Fusion, Susanna in Le nozze di Figaro, Despina in Così fan tutte, Zerlina in Don Giovanni, and Pamina in Die Zauberflöte under the baton of Maestro Christian Schulz at the Vienna Summer Music Festival.

Aside from being an active performer and collaborator primarily in both Boston and New York City, Jessica is a very passionate teacher and educator. Her teaching philosophy involves a holistic approach, giving her students the healthiest and most efficient way of using their voice for complete freedom of expression. Jessica takes pride in constantly being an advocate for her students and finds it of the utmost importance to always show compassion in an art form so vulnerable and personal.

So far her students have gone on to win competitions, perform lead roles, and receive cultural honors for their performances: (i.e. 1st place in the 2022 Student Hall Competition, Captain Walker in The Who’s Tommy the Musical, Miss Hannigan in Annie the Musical, multiple honors of singing The United States National Anthem, and more...). Jessica also teaches for the Arlington After School Private Lessons Program and The Boston Synagogue, and maintains a private studio (The Bloch Voice Studio) as a part of her collaborative company: Bloch Performing Arts Inc.

Jessica received her Bachelor of Arts in Theater and Music with an Italian minor from The Florida State University (2015), her Master Performance Certificate (2017) and Master of Music in Vocal Performance from The University of Connecticut (2019) under the tutelage of Dr. Constance Rock.