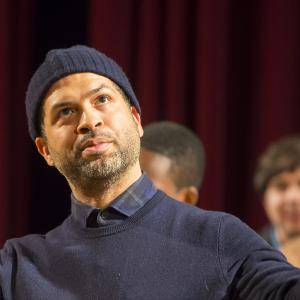 Pianist and composer Jason Moran joined the New England Conservatory faculty as of Fall 2010, following a series of residencies at NEC.

In September 2010, Moran was awarded a MacArthur Foundation Fellowship, and was cited by the Foundation for his "adventurous, genre-crossing jazz performances."

Moran became the Kennedy Center's Artistic Advisor for Jazz in 2011.

Named "Up-n-Coming Jazz Musician" of 2003 by the Jazz Journalists Association, and called "the most provocative thinker in current jazz" by Rolling Stone, Moran first came to prominence as a member of saxophonist Greg Osby's touring and recording band in 1997. In 1999, Osby's label, Blue Note, signed Moran to a recording contract in his own right. He has since released eight CDs as a solo pianist or bandleader, to great acclaim. His current band, the Bandwagon, is a trio with bassist Tarus Mateen and drummer Nasheet Waits.

After getting his early inspiration from Thelonious Monk, and his academic start at Houston's High School for the Performing and Visual Arts, Moran became one of Jaki Byard's last students in New York.

In addition to critical and audience recognition of his music, Moran has received commissions from the San Francisco Jazz Festival and Chamber Music America, to which he responded by using sampled conversations as vocal triggers. Moran's willingness to mix media is currently being fulfilled by collaborations with such noted visual and performing artists as Glenn Ligon, Kara Walker, and Joan Jonas.

Moran’s 1999 debut recording as a leader, Soundtrack to Human Motion, earned critical praise from The New York Times's Ben Ratliff, who named it best album of the year. His 2001 album, Black Stars, prompted Gary Giddins of The Village Voice to exclaim "Black Stars is possibly a Blue Note benchmark, definitely one of the year’s outstanding discs."

From Jason Moran's All Rise: A Joyful Elegy For Fats Waller.

A work is based on jazz slang and terminology.

"Artists Ought To Be Writing"