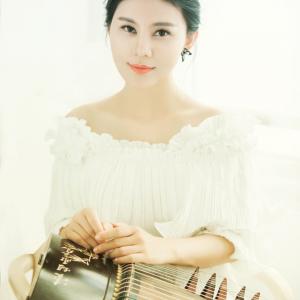 Hui Weng, a virtuosic performer steeped in age ­old Chinese traditions, is crossing musical boundaries that few others have dared to cross, receiving international acclaim for her performances of traditional, contemporary, and improvised music on her Guzheng. Ms. Weng enjoys a multifaceted musical career as Guzheng performer, lecture, and music director.

Ms.Weng has been awarded gold medals, “National Rising Star” and “Oriental Artist” among others for her performances in major national and international competitions. As the recipient of the 2014 Emerging Artists Award fellow from the St. Botolph Foundation, Ms.Weng received recognition for expansion of Guzheng performance to include singing, dancing and for her composing and curating new works.

As an active soloist, Ms.Weng works with such prominent orchestra as Youth Chinese orchestra, Boston Pops, ect. Her performance broadcast on WGBH national radio and CCTV music channel. In January 2011, she successfully presented a solo concert in Beijing and released her first album “Men of Letters”. She participated in many premiers of works by a new generation of composer including Tan Dun, Yi Chen, Xiaogang Ye, Anthony Paul De Ritis, and many others. After her arrival in the US, she made her American debut, “Twin Flowers,” in Pickman Concert Hall and “The Rumble of spring” benefit concert in Jordan Hall.

As lecture and performer, Ms.Weng was invited to take part in the Educational Residency Program in Brandeis university, which brings artists of high accomplishment from around the world to teach and perform. Additionally, since 2014, Ms. Weng has been collaborating with Yo Yo Ma’s silk road Ensemble. She has performed, lectured and given masterclasses in various music conferences, including Beijing international contemporary music festival, “the third stream” US-China music exchange workshop and Globe musician workshop.

Ms.Weng received her bachelor’s degree at Central Conservatory Of Music (CCOM), where she worked in the studio of Wang Zhou and was teaching at continued educational program at CCOM. She received her master of musical arts degree at New England Conservatory as the first Guzheng player, under the supervision of Dr. Hankus Netsky and Dr. Eden MacAdam-Somer. By performing in a multicultural and academic environment at NEC, Ms. Weng has been exploring new musical innovations on the Guzheng, and is developing her modern style of Guzheng performance by seeking the perfect combination of traditional Chinese music, Western classical music, World Music, and contemporary improvisation. She has re­composed and performed many original cross-cultural pieces in concert, for which she has received critical acclaim.

In 2015, She has held a teaching post in the Preparatory and Continuing Education Division at NEC. Ms. Weng is the instructor of the Chinese music ensemble at NEC Prep, while maintaining a private Guzheng (Chinese music) studio in NEC college. She has served as academic director of US-China Music Festival and Workshop summer program at NEC since 2015.