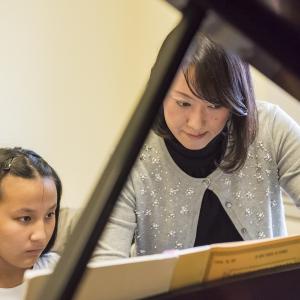 Koyama has earned degrees from the Juilliard School, Mannes College, and University for Music and Performing Arts Vienna. Currently, she is pursuing her doctoral degree at College-Conservatory of Music University of Cincinnati. She has played in master classes with world-renowned pianists such as Mitsuko Uchida and Robert Levin. Her significant mentors include Martin Canin, Victor Rosenbaum, Peter Efler, and Eugene Pridonoff.

Along with her passion for performance, she is an active teacher at both collegiate and preparatory institutions. She served as Adjunct Professor of Piano at CCM, Wittenberg University and piano faculty at CCM Preparatory Department. She gave recitals and master classes at Ohio Northern University, Ohio University, Providence College, Western Kentucky University and Wright State University. Her students have won scholarships, competitions around the country and have been pursuing further performance studies at major conservatories and universities in the U.S. She is a guest artist faculty at Atlantic Music Festival in Maine and a piano faculty at Shinshu Art Camp in Nagano, Japan.