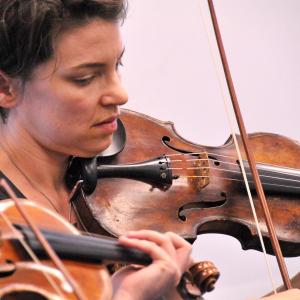 Carla Kihlstedt plays the violin, sings, improvises, and composes—sometimes at the service of a simple song, and other times, as part of a large-scale multi-faceted performance. Her ongoing collaborative projects cover a wide spectrum of sounds, from the rich and subtle acoustic composers' collective Tin Hat, the dramatic and alarming experimental rock band Sleepytime Gorilla Museum, the intimate, incisive purveyors of song 2 Foot Yard, and the fiercely spontaneous improvisational duo Minamo, with pianist Satoko Fujii. Kihlstedt has also recorded and performed with many of her favorite musicians, including Fred Frith, Tom Waits, Ben Goldberg, Lisa Bielawa, and Colin Jacobsen.

Though the cornerstone of her musical vocabulary comes from her classical training as a violinist, Kihlstedt's world now comfortably reaches far beyond the concert hall, as she has spent much of the last dozen years traveling in the U.S. and abroad with her many bands, playing in concert halls, rock clubs, and theaters, for rock, classical, and experimental audiences.

Kihlstedt has written scores for several dance and theater companies, including Flyaway Productions, inkBoat, and The Joe Goode Performance Group. Further highlighted compositions include Causing a Tiger, with Matthias Bossi and Shazad Ismaily, based around field recordings from her travels, and Pandæmonium, written for the ROVA Saxophone Quartet, which is based on observations from 1660-1880 of the coming of machine age. Four of the nine movements of Pandæmonium are graphic scores sewn by hand.

Kihlstedt is currently developing a new piece with her husband, musician and actor Matthias Bossi, that looks at family histories as interpreted by memory and myth.