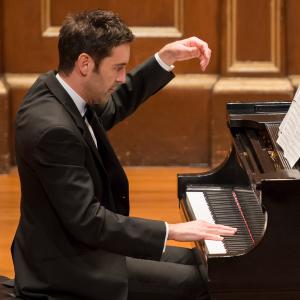 Pianist Cameron Stowe is a leading specialist in the study and performance of song recital repertoire. Throughout his career his work has been led by his passion for poetry and song, and he has received much critical praise and numerous awards for his commitment to this art form. A pianist "worth his weight in gold," "Strong, precise, supple and sensitive" (New York Times) he has been praised for "his subtlety, his knack of supporting the voice and engaging it in dialogue, his powers of mood painting" (Washington Post) and his ability to "match the singer subtlety for subtlety, shimmer for shimmer" (Baltimore Sun).

Stowe has appeared in concert venues and music festivals in the Far East, Europe, South America, and throughout the United States and Canada, playing with some of the most prominent concert singers of his generation, including Randall Scarlata, Susan Graham, Measha Brueggergosman, Danielle DeNiese, Faith Esham, Vinson Cole, Sari Gruber, and Jesse Blumberg.

Since 2008, Stowe has served as Chair of the Collaborative Piano department at New England Conservatory and as a faculty member at The Juilliard School. Formerly a professor at University of Toronto, his festival teaching includes residencies at Aspen Music Festival, Toronto Summer Music Festival, Vancouver International Song Institute, and he has given masterclasses for singers and pianists throughout the United States and abroad. This season's engagements include concerts and masterclasses in New York, Chicago, Beijing, London, Taipei, Toronto, Baltimore, and Seville and a recording of late Schubert songs with baritone Randall Scarlata.

Recent educational projects include extensive work with musicologist Benjamin Binder, with whom he has created unique song workshops and summer courses for performers, musicologists, theorists, and literary scholars. Together, they led the Scholarship in Song Performance summer festival at University of British Columbia for four years, where they assembled groups of students and professionals, including Susan Youens, Jane Brown, Richard Kramer, Michael Musgrave, Graham Johnson, Thomas Allen, Ann Murray, and Margo Garrett, to encourage cross-disciplinary approaches in the study of song.

In addition to numerous masterclasses and residencies in the Far East, Stowe also served as keynote speaker and artist-teacher at the first Chinese National Conference on Collaborative Piano, where he worked with piano professors from China's leading conservatories in developing their academic system for collaborative piano studies.

Stowe holds a doctorate from Juilliard with a specialized focus in song and vocal chamber music. He earned a Masters degree from The Peabody Conservatory (Johns Hopkins) and a Bachelors degree from Oberlin College Conservatory. He also studied at the North Carolina School of the Arts, the Académie de Musique de Sion, and Tanglewood Music Center.