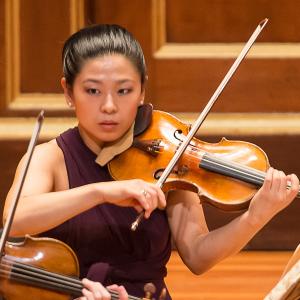 Ninomiya has established a wide-ranging professional career encompassing solo appearances with orchestras in Europe and the U.S., chamber music performances, research, and outreach programs. She has spent several seasons at the Caramoor, Bridgehampton, Olympic, and other festivals, and joined Musicians from Marlboro for the group’s 2004 U.S. tour and 2005 tour of France. She has performed with the Momenta String Quartet and the Formosa String Quartet in Singapore and across the United States, and with the Daedalus Quartet at Juneau’s Jazz and Classics Festival. She also has been a member of the Australian-based TinAlley String Quartet and the conductorless string ensemble ECCO (East Coast Chamber Orchestra.)

After early studies at New England Conservatory's Preparatory School, Ninomiya graduated from Harvard in 2001 with a dual degree in Music and French, and she holds a master’s degree from The Juilliard School. As the recipient of the 2005 Frank Huntington Beeve Fellowship for advanced music study and performance, Ninomiya studied at the Liszt Academy of Music in Budapest and researched scores at the Bartok Archives.