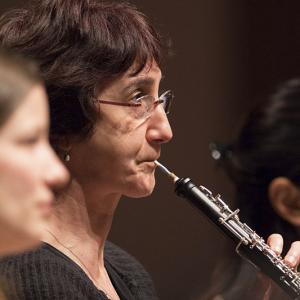 A native of Rhode Island, Gabriele accredits her musical inspiration to an exceptionally strong public high school music program whose wind ensemble performed and competed internationally. At the Juilliard School in New York City, she earned bachelor’s and master’s degrees under the tutelage of John Ferrillo and Elaine Douvas of the Metropolitan Opera Orchestra. While at Juilliard, she performed at the nationally televised Kennedy Center Honors to William Schuman and recorded several 20th-century works for the Juilliard American Music Recording Institute on New World Records.

Gabriele has participated in numerous music festivals, including the Aspen, Kent/Blossom, and Waterloo festivals, as well as the National Orchestra Institute and the Breckenridge Music Festival. Recent solo appearances have included performances with the Canton Symphony in 1996 and 1998. Since 2006, she has been Principal Oboist of the Mozaic Festival in San Luis Obispo, California, and since 2008 she has been a founding member of Music on the Hill Chamber Music Series in Providence, R.I. She has served on the faculty of Colorado College Music Festival and is a guest teacher at The Colburn School and Indiana University as well as an adjunct faculty member at New England Conservatory.