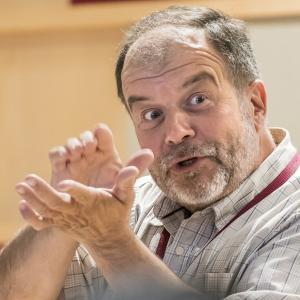 Alfred Dentino, an alumnus of Concord-Carlisle Regional High School in Concord, Massachusetts, received his Bachelor of Music Education Degree from The Ohio State University in 1976. While at Ohio State, he was principal clarinetist and President of the Ohio State University Concert Band under the direction of Dr. Donald E. McGinnis. He earned his Master’s Degree in Fine Arts from Harvard University in 1991 where he won the Crite Prize for his research into the portrayals of musical instruments in ancient Greek Art.

Mr. Dentino has taught in the Columbus, Ohio Public Schools, Wachusett Regional School District in Holden, Massachusetts, the Concord Public Schools, and the Concord-Carlisle Regional School District. From 1993 until he retired from public school teaching in 2012, he served as Director of Bands at Concord-Carlisle Regional High School where his responsibilities included directing the Repertory and Concert Bands, Pep Band, Orchestra, and Jazz Bands as well as conducting the Pit Orchestra for the school’s annual musical. Under his direction, the CCHS Concert Band earned nineteen gold medals at the Massachusetts Instrumental and Choral Conductors Association (MICCA) State Concert Festival. The CCHS Concert Band undertook extremely successful tours of Hokkaido, Japan in 1998, 2004, 2007 and 2010 and the CCHS Jazz Band visited Beijing, China in 2000. The CCHS Concert Band has performed at some of the finest concert venues in the world. Among these are Mechanics Hall in Worcester, Massachusetts, Ozawa Hall at Tanglewood, Symphony Hall in Boston, and Kitara Hall in Sapporo, Hokkaido, Japan. The joint Sapporo and Concord-Carlisle concerts at Symphony Hall (Japan Night At Symphony Hall) in 2003 and 2008 were incredible experiences for both performer and audience member alike.

In retirement, Mr. Dentino continues to teach. He is currently an Emeritus Teacher of Music Theory at Concord-Carlisle, maintains an active private teaching schedule, and is Assistant Director of the Lexington Bicentennial Band. He has served as Treasurer, Vice-President, and President of MICCA. Mr. Dentino has conducted the Massachusetts Music Educators Association (MMEA) Western District Festival Band, the All Cape Cod and Islands Band, and the Nashua (New Hampshire) Honors Band. He is the recipient of the MICCA Hall of Fame award for 2001 and continues to serve MMEA and MICCA as a clarinet and ensemble adjudicator and clinician. Mr. Dentino and his wife, Chris, currently reside in Lancaster, Massachusetts where they operate a small equestrian boarding and riding facility.