In 2004, Scott Pingel became the principal bass of the San Francisco Symphony and the San Francisco Chronicle named him one of the most prominent additions to the ensemble. Previously, he served as principal bass of the Charleston Symphony Orchestra, performed with the Metropolitan Opera, and served as guest principal with the National Arts Center Orchestra in Canada. His solo performances with ensembles such as the San Francisco Symphony, the San Francisco Academy Orchestra, and the Charleston Symphony Orchestra, and his recitals (frequently consisting of his own arrangements) have received critical acclaim. As a chamber musician, he has collaborated with luminaries including Yo-Yo Ma and members of the Emerson, Miro, Pacifica, St. Lawrence, Danish, and Takács quartets. He can often be heard at the Arizona Musicfest, Music@Menlo, and Music in the Vineyards festivals and on television and radio programs including NPR’s Performance Today. Formerly active as a jazz musician and electric bassist, he worked with greats including Michael Brecker, Geoff Keezer, and James Williams, and performed in venues from Birdland in New York to Fasching in Stockholm. He held a tenured position at the University of Michigan, and currently serves on the faculty of the San Francisco Conservatory of Music. Mr. Pingel’s primary instructors were James Clute, Peter Lloyd, and Timothy Cobb. He earned a bachelor's degree from the University of Wisconsin-Eau Claire, a master's degree from the Manhattan School of Music, and spent two years as a fellow at the New World Symphony. 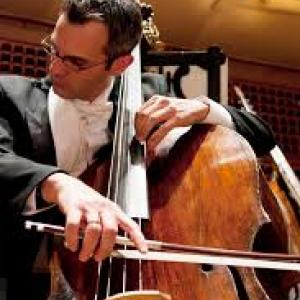