Known for Her Generosity of Spirit, She Taught on Faculties of the College, Preparatory School for 28 Years

Served as Principal Second Violin of Boston Symphony for 23 Years, and Member of Orchestra for 30 Years

New England Conservatory is mourning the death of violinist and teacher Marylou Speaker Churchill, member of the College and Preparatory School faculties and wife of Mark Churchill, Dean and Artistic Director of Preparatory and Continuing Education. Former Principal Second Violin of the Boston Symphony Orchestra, Mrs. Churchill died November 10 surrounded by her loved ones. She was 64.

Brought up in Portland, Oregon, Mrs. Churchill began studying violin at age 7 and became active in youth orchestras by the time she was 10.  She came east to Massachusetts when she was 18 to be a fellow at the Tanglewood Music Center.  At Tanglewood, she came to the attention of Boston Symphony Orchestra concertmaster Joseph Silverstein and followed him to NEC where she studied with him until receiving her B.M. with honors in 1967.  From there, she went to the University of Southern California for graduate work, serving as concertmaster of the university orchestra and first violinist of the resident string quartet. After graduation, she worked as a  freelance musician in Los Angeles until receiving an invitation to join the BSO in 1970.

“When I got that letter, I thought, ‘This is it.’ I never thought of applying to another orchestra. This was the only orchestra I want to play in…” she told the Boston Globe in August 2000, as she was retiring after a 30-year career.  Mrs. Churchill played as a member of the violin section until 1977 when she was appointed Principal Second Violin of the BSO and Boston Pops. In 1993, she was appointed second violinist of the BSO Chamber Players. Her former teacher and later BSO colleague Joseph Silverstein remarked that "she was a tower of strength in the Principal Second Violin chair. She was enormously supportive of every conductor who appeared, never questioning their qualities."

Having returned to Boston to play with the BSO, Mrs. Churchill also returned to NEC, where she joined the Preparatory School faculty in 1981.  She served as chair of the Prep string department for 10 years and was known for mentoring some of the school’s most talented young students—violinists like Elizabeth Ann Larson and Ayano Ninomya.  Her husband recalled that she maintained a studio of 25—30 students even as she played full-time in the BSO.  "She would start teaching at 8 a.m. on Saturday and go through until 6, have dinner, and then go play a BSO concert," he said.  "She would often stop at the Symphony shop and buy chocolate to get her through the concert and when she retired the Symphony shop gave her a huge basket of chocolates." 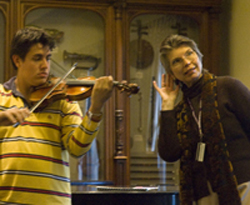 As part of her work mentoring young orchestra-players-to-be, Mrs. Churchill offered many words of wisdom about the challenges before them.  In a 1994 conversation with some New World Symphony players, she talked about the specter of stage fright that many unsuccessful auditioners blamed for their poor showing. "Assuming proper preparation and a good attitude (I have nothing to lose, I don't have the job so I can't lose it), the manifestation of a loss of control is simply fear; fear of not doing as well as you can," she said. Drawing on her deep religious faith, she asserted: "There is a law of this universe which is so simple and so powerful and it literally wipes this fear out of your being, and it is this... 'perfect love casts out fear.' If you are actively engaged in loving your instrument, loving the music, loving the audience, loving the committee, loving your enemies, then there is simply no room for fear of any kind, and you will find yourself playing better than you expected."

Speaking about the work of an orchestra musician, she asked: "Is playing orchestra a joy or a job? It's wise to make it a joyful job, but remember that no job really employs you completely. Working for money is never the real reason for doing any job. You must love what you do, and then you will find happiness and joy in your work. In actuality you are always being employed to express all the best qualities you are capable of, such as intelligence, wisdom, beauty, balance, grace, sensitivity, awareness, love... If you are miserable, it's your own fault. Make excellence, beauty, and truth your goals, and you will rise to that level."

Former Boston Globe Music Critic Richard Dyer, who followed her playing in the BSO for more than two decades, recalled Mrs. Churchill as "a radiant presence in the orchestra."  Along with leadership qualities, "she brought musicianship, command of the instrument, perfect intonation, lustrous tone.  The range of her imagination was matched only by the intense focus of her concentration on detail.  She was a both a wonderful soloist and a wonderful, interactive chamber-music player, and both of these qualities played into her role in the orchestra; she was a team player who elevated the quality of the ensemble."

Upon her retirement from the BSO, Mrs. Churchill increased her teaching commitment as a member of the NEC college faculty, which she had joined in the late 1990s. Along with studio teaching, she brought her enormous experience as an orchestral player to bear in the Orchestral Repertory class.  It was as a member of that class that violinist/violist Julianne Lee ’08 M.M. was encouraged to audition for the BSO and was engaged while still a student. 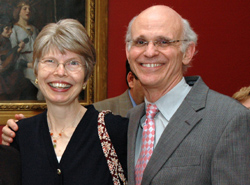 A teaching position at NEC was also responsible for Mrs. Churchill meeting her husband.  It was Mark Churchill, a cellist and conductor who –then as now—directed the Preparatory School, who recruited her as a violin teacher in 1981. A year later they were married.  In 1996, the couple adopted twin eight- month old daughters, Emma Claire and Julia Helen, who came to them from the Marshall Islands in the South Pacific.  Both girls are active in the NEC Preparatory School as pianists and string players.

Mrs. Churchill was always much in demand as a teacher and she traveled around the globe coaching and leading masterclasses. She was invited by Sir George Solti to be faculty and Principal Second Violin of the Carnegie Hall Solti Project in 1994, and a year later, he invited her to lead the second violins in the Musicians of the World orchestra concert held in Geneva, Switzerland to celebrate the 50th anniversary of the United Nations. She also coached for the New World Symphony Orchestra in Miami Beach, Florida and was a violin coach for the Asian Youth Orchestra in Hong-Kong, youth festivals in New Zealand and the USA, and for Venezuela’s El Sistema.

Her commitment to her students and other young musicians extended to opening her home to a veritable “parade of music students” who needed a place to live, according to a 2000 Berkshire Eagle story.  This included a Chinese couple she met during the BSO’s pioneering tour of China in 1979 and some 80 other “adoptees” from abroad. Other examples are the young Ayano Ninomya who lived in the Churchill household after her parents returned to Japan when she was 11 years old, and Itamar Golan, now a leading collaborative pianist.

Mrs. Churchill's devotion to teaching was honored in 2006 when she received the Louis and Adrienne Krasner Teaching Excellence Award at NEC's Commencement exercises. Her many achievements in music were honored in 1988 when she was presented with an NEC Outstanding Alumni Award on the occasion of her 20th Reunion.

"Marylou was absolutely committed to the wellbeing of her students in every sense," said NEC President Tony Woodcock.  "She not only concerned herself with their technical command of the instrument but also their musicianship, their sense of responsibility to the art, and their physical and spiritual health.  She had a transformative effect on their lives."

Woodcock's thoughts were echoed by Laurence Lesser, President Emeritus of NEC and occupant of the Walter W. Naumburg Chair in Music. "Marylou was my valued friend and colleague from the time we met at USC some 40 years ago.  She was then a graduate student and I a very young faculty member, and coaching her in a Brahms Trio was a joyful experience.  When I came here in 1974, she was a stalwart of the BSO and already a pillar of the faculty.  She was always generous of spirit, warm in friendship and nurturing to all those around her.  Her contributions to NEC would fill volumes and she and her husband, Mark (a member of my first class of cellists here), gave selflessly and seemingly endlessly to the institutional home they loved so much."

Funeral arrangements will be private. A celebration of Mrs. Churchill's life will take place in the near future. A scholarship fund in her memory will also be established at the NEC Preparatory School.

Recognized nationally and internationally as a leader among music schools, New England Conservatory offers rigorous training in an intimate, nurturing community to 750 undergraduate, graduate, and doctoral music students from around the world.  Its faculty of 225 boasts internationally esteemed artist-teachers and scholars.  Its alumni go on to fill orchestra chairs, concert hall stages, jazz clubs, recording studios, and arts management positions worldwide.  Nearly half of the Boston Symphony Orchestra is composed of NEC trained musicians and faculty.

NEC is co-founder and educational partner of “From the Top,” a weekly radio program that celebrates outstanding young classical musicians from the entire country. With its broadcast home in Jordan Hall, the show is now carried by National Public Radio and is heard on 250 stations throughout the United States.