Naumburg winning violinist adds another major prize to her portfolio 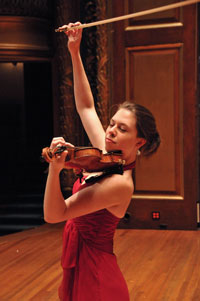 NEC violinist Tessa Lark ’11, ’12 M.M., who studied with Miriam Fried and Lucy Chapman at the Conservatory, has been named one of seven arts fellows to receive 2014 grants from the Leonore Annenberg Fellowship Fund for the Performing and Visual Arts. The award provides $50,000 a year for up to two years to young artists of exceptional promise. It was announced today along with awards to eight underserved public elementary schools which received support for technology and other educational resources. Last fall, 10 high school students were also awarded $2.5 million in college scholarships.

Now in its seventh year, the 10-year Leonore Annenberg Funds initiative has awarded a total of $13.2 million to arts fellows, students, and schools. The funds are administered by the Annenberg Public Policy Center of the University of Pennsylvania.

Past recipients of the arts fellowship include Misty Copeland, the first African-American female soloist in two decades with American Ballet Theatre and author of the recent autobiography Life in Motion: An Unlikely Ballerina; actor Bryce Pinkham, who is starring on Broadway in the musical comedy A Gentleman’s Guide to Love & Murder; and photographer Richard Mosse, selected to represent his home country, Ireland, at the 2013 Venice Biennale.

“The Leonore Annenberg Fellowship Fund provides support to artists during a vibrant period of transition in their professional life, enabling them to develop artistically as they realize their career goals,” said program director Gail Levin, Ph.D. Partnering with organizations such as American Ballet Theatre, the Yale School of Drama, and the Pennsylvania Academy of the Fine Arts, the fund identifies and nurtures emerging artists of great potential with career development grants and the support of mentors. 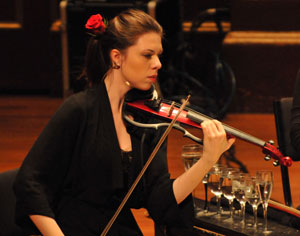 Living in Boston since graduating from NEC, Lark was born and raised in rural Kentucky. At age six, she began studying the violin with Cathy McGlasson. At age 11, she began six years of violin studies with Kurt Sassmannshaus at the Cincinnati Conservatory of Music (CCM) through the Starling Preparatory String Project. Through June 2006, Tessa was concertmaster of the Starling Chamber Orchestra at CCM, toured southern China with them in 2001, performed with them at Aspen in 2002 and 2004, and performed with them in Germany, Austria, and Russia in 2003 and in London in 2004. This impressive classical training was complemented by her extensive experience performing Appalachian folk music while growing up. This includes playing with Narrow Road, a Kentucky Gospel Bluegrass Band, and attending the Mark O'Connor Fiddle Camp near Nashville in 2000, 2003, 2005, and 2006.

Lark won first prize at the 2012 Naumburg International Violin Competition – the first American to do so since 1960 – and first prize in the 2008 Irving M. Klein Competition. Her piano trio, mod3TRE, also won a silver medal at the 2012 Fischoff National Chamber Music Competition. At NEC, she won a concerto competition and appeared as soloist in the Walton Violin Concerto with the NEC Philharmonia and conductor Hugh Wolff. And she performed George Crumb's Black Angels on Valentine's Day 2012 in a concert coached by John Heiss. (see photo above )

For the purposes of the Annenberg grant, she has proposed to record Telemann’s Twelve Fantasias for Solo Violin. Her recording of Bartok's Romanian Dances, captured below, was made in support of her grant application.

The only conservatory in the United States designated a National Historic Landmark, NEC presents more than 900 free concerts each year. Many of these take place in Jordan Hall (which shares National Historic Landmark status with the school), world-renowned for its superb acoustics and beautifully restored interior. In addition to Jordan Hall, more than a dozen performance spaces of various sizes and configurations are utilized to meet the requirements of the unique range of music performed at NEC, from solo recitals to chamber music to orchestral programs to big band jazz, Contemporary Improvisation, and opera scenes. Every year, NEC’s opera studies department also presents two fully staged opera productions at the Cutler Majestic Theatre or Paramount Center in Boston, and a semi-staged performance in Jordan Hall. This season, the operas produced were Mozart's La clemenza di Tito," Monteverdi's L'Incoronazione di Poppea, and Strauss's Die Fledermaus.