The epitome of the Third Stream musician, Joseph Maneri is dead at 82.

Received Honorary Doctorate from NEC in May

Netsky, Maneri at Commencement (Miro Vintoniv photo)New England Conservatory is mourning the death of Joseph Gabriel Esther Maneri, a longtime and much beloved faculty member and legendary jazz figure, who died August 24 at age 82.  Maneri, who taught at the Conservatory from 1970 to 2007, received an honorary doctorate this past May in recognition of his enormously varied musical accomplishments, his indelible teaching style, and the many gifted performers who carry on his musical legacy. Among his former NEC students are such high profile jazz and classical artists as Richard Danielpour, John Medeski, Marty Ehrlich, Satoko Fujii, Matana Roberts and Cuong Vu.

Although his formal schooling only went through the eighth grade, the New York-raised Maneri received a rigorous classical music education from Josef Schmid, a pupil of Alban Berg, who taught courses in Arnold Schoenberg's harmony, counterpoint and composition. Maneri himself went on to teach harmony, 16th Century counterpoint and composition at the Brooklyn Conservatory while continuing to compose. In 1963, he was commissioned by Erich Leinsdorf of the Boston Symphony Orchestra to write a piano concerto. The resulting Metanoia did not get a BSO performance, but was premiered in 1985 by the American Composers Orchestra and pianist Rebecca la Brecque at Alice Tully Hall. 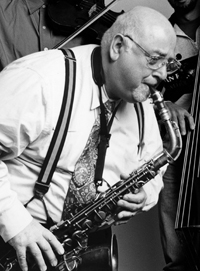 Joe Maneri on saxAt NEC, Maneri was the epitome of the Third Stream musician as envisioned by then NEC President Gunther Schuller in the newly created department of that name.  Maneri bridged the classical and improvisation worlds by teaching harmony, counterpoint, composition, saxophone, improvisation and later microtonal theory and composition as well as jazz. He also gave studio lessons.  "He took on the challenge of bringing everything he had learned about music to the classroom," said Hankus Netsky, Chair of Contemporary Improvisation (formerly the Third Stream department).  "His innovations at NEC included Performance Techniques, a class where students might be asked to perform movements of symphonies or scenes from operas on whatever instruments happened to be present. His Microtonal Music seminar challenged students to think entirely outside any box their training might have put them in."

However much they learned about music in his classes, Maneri's students absorbed as well his open-hearted warmth and generosity.  Ben Schwendener, now an NEC jazz faculty member, recalls "going to Joe's when I was having a hard time in my youth.  We would spend long weekend days together, eating spaghetti, talking, and playing. And it was all about heart, love and openness." 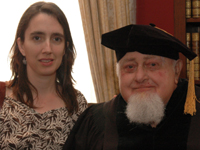 Julia Werntz, Maneri (Miro Vintoniv photo)Fascinated with the possibilities of microtonal music from an early age, Maneri was co-inventor of a microtonal keyboard that had 588 notes with 72 notes per octave. He also co-authored Preliminary Studies in the Virtual Pitch Continuum with Scott Van Duyne.  Using that microtonal textbook, his students learned to hear, sing, play and write in 72-note equal temperament.

Overwhelming interest in his NEC microtonal class led in 1988 to Maneri's founding of the Boston Microtonal Society, a non-profit group promoting the study and performance of microtonal composition. The organization continues to produce concerts in Boston and New York City, is a licensed music publisher, and awards the Jonathan Keith memorial scholarship every year to an NEC student who shows achievement and dedication to microtonal study. Maneri's former composition student, Julia Werntz, who has written both her doctoral thesis and an article in Perspectives of New Music on microtonal composition and Maneri's music, is currently Artistic Director of the Society.  She also teaches the microtonal music course at the Conservatory. Of her former teacher and friend, she said: "Joe Maneri broke ground as both a composer and an improvisor with an approach to melody the world had never heard, a strange and powerful microtonal lyricism. He was an intensely demanding teacher, but wildly popular because of his irreverent sense of humor, and because of the important messages he passed on to students about love and authenticity of expression. Many of the students he influenced have gone on to illustrious careers of their own, and several of these are on the NEC faculty today."

As a player, Maneri was "perhaps best known as a saxophonist and clarinetist on New York’s jazz and ethnic music scene," according to Netsky. "However, it was never enough for him to play or write music the way others did it.  He re-invented every genre he worked in, bringing the challenging disciplines of twelve-tone composition and microtonality to his improvisations, wowing his audiences even as he stretched their ears beyond their wildest dreams."

At NEC, Maneri co-founded NEC’s Enchanted Circle contemporary music concert series in 1977, and co-directed it through 1997.  These performances "provided the template for what is now known as New York City’s 'Downtown Scene,' a scene still largely dominated by his former NEC students," Netsky said.  "But, impressive as they might be, none of these other performers ever reached the level of virtuosity, control, and pure musical imagination of Joe’s best work." 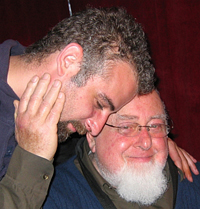 Mat and JoeAfter a hiatus from performing of several decades, Maneri began playing again in the early 1980s, forming a trio with his son Mat on violins and violas (modified with extra strings and electronics) and drummer Randy Peterson. Encouraged by the enthusiasm his performances generated, he put out an impressive number of recordings from the 1990's until 2003, usually featuring the trio, sometimes augmented by performers such as John Lockwood, Uwe Steinetz, Pandelis Karayorgis, Ben Schwendener, Joe Morris and Ed Schuller.

No less a connoisseur and fellow musician, pianist Ran Blake had this to say about Maneri's playing: "When one hears Maneri on his clarinet, one hears the cries of the Middle East and Brooklyn where Joe lived for many years. His own microtones come not from his theory but from life’s experiences. Some of his notes scream with ghetto resistance."

Maneri is survived by his wife Sonia, five children, and eight grandchildren.  There will be a private service for family and a public memorial service to be announced at a later date.  In lieu of flowers, memorial contributions in his name may be sent to the Boston Microtonal Society, 55 Beacon St., North Adams, MA 02147.

For further information, check the NEC Website at: necmusic.edu or bostonmicrotonalsociety.org