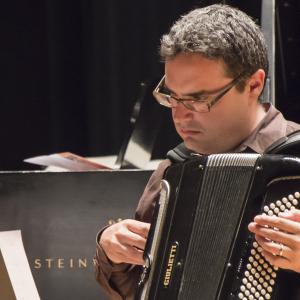 Ted Reichman is an accordionist, keyboard player, and composer, focusing on connections between improvisation and various forms of folk, popular music, and jazz. He works as a film composer and record producer, in addition to performing worldwide in John Hollenbeck's Claudia Quintet, and other jazz and rock bands.

At Wesleyan University, Reichman studied with Alvin Lucier and Anthony Braxton, taking up the accordion at Braxton's behest. At age 19, Reichman participated in his first recording session for Braxton. His work with Braxton would eventually include many concert performances in duo, small group, and large ensemble settings, as well as recording on eight of Braxton's albums, including Duo (Leipzig) 1993, and the earliest recordings of Braxton's Ghost Trance Music. He also assisted Braxton in the production of his monumental opera Trillium M.

Reichman's early years in New York also included a series of influential music business ventures. In 1995, he founded a legendary concert series at alt.coffee, an East Village, New York, coffeehouse and performance space, where he began his over 15-year association with world-renowned composer John Hollenbeck. Reichman then became the original curator of Tonic, which would grow into one of the world's major venues for new music and avant-rock.

Reichman's work as a composer includes the critically acclaimed albums Emigré, and My Ears are Bent. His work in film music includes original scores for the feature films Rick, The Memory Thief, and several documentaries, including States of UnBelonging and Ahead of Time. Songs by Reichman are also featured in the animated film Year Of The Fish. Reichman was a 2010 Fellow at the Sundance Institute Documentary Composers Lab.