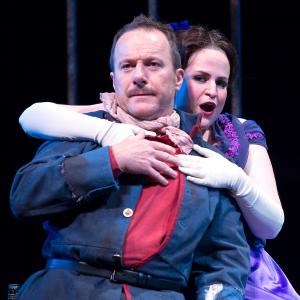 Steven Goldstein has acted on Broadway and in television dramas, directed theatre and opera, and sung opera himself. At New England Conservatory, he will work with both graduate and undergraduate students, teaching classes and directing scenes and productions. He comes to NEC from the University of Cincinnati College-Conservatory of Music where he served as Weinberger Chair of Acting for the Lyric Theatre.

Goldstein has appeared in productions staged by David Mamet, William H. Macy, and renowned opera director Francesca Zambello. A founding member of the Atlantic Theater Company in New York, his acting performance highlights include Our Town on Broadway with Spalding Gray; the premieres of Boy’s Life, Oh Hell, and The Lights at the Lincoln Center Theatre; Romance (premiere), The Vosey Inheritance, The Water Engine, and Shaker Heights (premiere) at the Atlantic Theater Company; Romance and Keep Your Pantheon (premiere) at the LA Theater Center; Intimate Apparel (premiere) at Center Stage Baltimore; and Harmony (premiere) at La Jolla Playhouse.

His TV appearances include Quarterlife, Law & Order and The Guiding Light. On film, he has acted in The Untouchables, Signs and Wonders, The Spanish Prisoner, The Night We Never Met, Homicide, House of Games and Things Change.

His directing credits at CCM include the musical theatre productions Spring Awakening, A Little Night Music, Evita, Street Scene, and Hello Again, as well as the operas La Tragedié de Carmen, Dialogues of the Carmelites and Die Fledermaus.