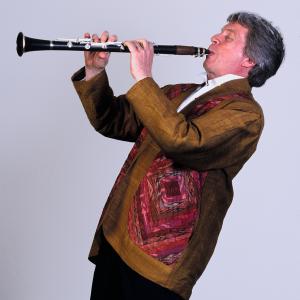 Clarinetist Richard Stoltzman has opened up new possibilities for the instrument, giving the first clarinet recitals in the histories of both the Hollywood Bowl and Carnegie Hall, and becoming the first wind player to be awarded the Avery Fisher Prize in 1986. He has performed as soloist with more than one hundred orchestras, as a recitalist, chamber musician, and jazz artist. He has performed or recorded with Gary Burton, the Canadian Brass, Chick Corea, Judy Collins, Eddie Gomez, Keith Jarrett, the King’s Singers, George Shearing, Wayne Shorter, Mel Tormé, and Jeremy Wall of Spyro Gyra. He has commissioned and premiered dozens of new works for clarinet. For ten years Stoltzman was a participant in the Marlboro Festival, and subsequently became a founding member of the Tashi chamber music ensemble in 1973. Other chamber music performances and recordings include work with the Beaux Arts Trio and the Amadeus, Cleveland, Guarneri, Vermeer, Tokyo, Emerson, and American string quartets. He has received Grammy awards for his recording of the Brahms sonatas with Richard Goode (1982) and the Beethoven, Brahms, and Mozart clarinet trios with Emanuel Ax and Yo-Yo Ma (1997). He received an Emmy Award for best performing arts video for his performance of the Copland clarinet concerto with Dudley Moore and Michael Tilson Thomas. His laserdisc/videocassette project 1791-1891-1991 includes a performance with Rafael Frühbeck de Burgos in Vienna’s Konzerthaus of Mozart’s clarinet concerto—200 years to the day after its premiere—along with Brahms’s clarinet quintet and the premiere of Takemitsu’s Fantasma/Cantos.

Stoltzman is the author of the books Aria and The Richard Stoltzman Songbook, both published by Carl Fischer, Inc. Stoltzman has recorded several CDs of clarinet concerti written for him by American composers.

In 2013, Richard Stoltzman was elected a Fellow of the American Academy of Arts and Sciences.