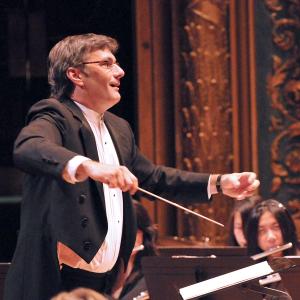 Mr. Mucci's Longmeadow ensembles performed at the National Band and Orchestra Festival at Carnegie Hall and Boston Symphony Hall, the National Concert Band Festival in Indianapolis, Indiana, and at the International Association of Jazz Educators Convention. Under his direction, the Longmeadow High School Symphony Orchestra received the 2010 American Prize for Secondary School Orchestral Performance and the Longmeadow High School Music Department was awarded three Grammy Signature Awards by the National Association of Recording Arts and Sciences.

Mr. Mucci is currently in his twenty-third season as Director of the Massachusetts Youth Wind Ensemble at the New England Conservatory of Music. Under his leadership, MYWE has performed in the National Band Festival at Carnegie Hall, and was featured as part of "Winds Across the Century," a nationwide wind symposium held at the New England Conservatory of Music. MYWE has also shared the stage with the Metropolitan Winds and the Boston College Wind Ensemble, performed at the National Music Educators All Eastern Conference in Providence, Rhode Island, and toured Italy, performing concerts in Florence, Naples, Rome, and the Vatican City, where they played for Pope John Paul II. Under Mr. Mucci's leadership, MYWE has also performed in Austria, the Czech Republic, England, France, Germany, Hungary, Ireland, Poland, Portugal, Scotland, Spain, and Wales.

Mr. Mucci serves as an adjudicator for the Massachusetts Instrumental and Choral Conductors Association and has appeared as a guest conductor with festivals throughout New York and New England. He has received the Citation of Excellence from the National Band Association and the 2011 Lowell Mason Award from the Massachusetts Music Educators Association for outstanding leadership in music education. He has also received the Pioneer Valley Excellence in Teaching Award; the New England Public Radio Arts and Humanities Award; the Singer Family Prize for Excellence in Secondary School Teaching, awarded by the University of Rochester; and the Jean Stackhouse Award for Excellence in Teaching, given by the New England Conservatory of Music. Mr. Mucci was elected into the Massachusetts Instrumental and Choral Conductors Association's Hall of Fame in 2017. He and his family reside in Longmeadow, MA, where the Longmeadow High School Concert Hall was named in honor of Mr. Mucci on November 24, 2015.