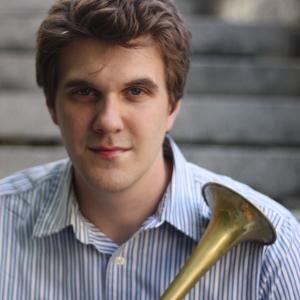 Michael Dobrinski joined the New England Conservatory trumpet faculty in the fall of 2018. Michael performs regularly with the Boston Symphony and Boston Pops, including performances at Tanglewood, Carnegie Hall, and the 2015 European tour. He also appears on the Boston Symphony recording of Shostakovich Symphony no. 7, and the forthcoming recordings of Shostakovich Symphony no. 12, and Strauss “An Alpine Symphony.”

Michael is 2nd Trumpet in the Rhode Island Philharmonic, and was previously the Principal Trumpet of the Sarasota Orchestra and a member of the Sarasota Brass Quintet. He has also performed with the Naples Philharmonic, Florida Orchestra, New World Symphony for the grand opening of the New World Center in Miami, Florida, and has appeared as guest Principal Trumpet with the Fort Worth Symphony, Boston Modern Orchestra Project, and Boston Pops Orchestra.

Michael holds degrees from the New England Conservatory, Boston University, and Manhattan School of Music. His awards include first prizes in the National Trumpet Competition and the National Brass Symposium Orchestral Excerpt Competition, a Williamson Foundation Festival Grant, and the Voisin Trumpet Award from the Tanglewood Music Center.