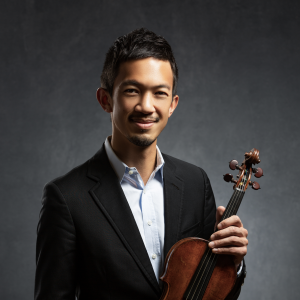 Kristopher Tong joined the Borromeo String Quartet, New England Conservatory's quartet-in-residence, as second violinist in March 2006. A member of the chamber music and violin faculties, he also serves as assistant chair of strings.

Tong has been hailed as a performer of "exceptional insight and creative flair" (Boston Globe). As second violinist of the Borromeo String Quartet, he has performed in hundreds of concerts across the United States and around the world to critical acclaim. Recent engagements include appearances at the Isabella Stewart Gardner Museum, and Carnegie’s Weill Recital Hall, including premieres of works by Aaron Jay Kernis and Sebastian Currier.

In addition to his concertizing with the Borromeos, Tong is an active recitalist, chamber musician, and teacher. He has taught and performed at numerous festivals, including the Taos School of Music, Four Seasons Chamber Music Festival, Music@Menlo, and at the Heifetz Institute. Tong has performed on such radio programs as NPR’s "Performance Today," WGBH’s "Classical Performance," and was featured on WGBH’s "Classical Connections" in a series entitled "Why Mass.?"

From 2002-2004, Tong was Principal Second Violin with the Verbier Festival Orchestra, with whom he toured throughout Europe, Asia, and the Americas. He has played under the baton of some of the world's premier conductors, including James Levine, Christopher von Dohnanyi, Kurt Masur, Mstislav Rostropovich, Wolfgang Sawallisch, and Charles Dutoit. He has also performed with Mizayaki Festival Orchestra in Japan, the New York String Orchestra, and as a guest soloist with the Verbier Chamber Orchestra under Dmitri Sitkovetsky and Yuri Bashmet. Tong was also a member of the original cast of Classical Savion at the Joyce Theater in New York City, a collaborative project with tap dancer Savion Glover.

Kristopher Tong began his violin studies in a public elementary school program in Binghamton, N.Y. His family later moved to Salt Lake City, Utah, where he became a student of Leonard Braus. He received his bachelor's degree at Indiana University in Bloomington, where he studied with Franco Gulli, Yuval Yaron, and Miriam Fried. In 2005 he completed his master's degree under Fried at New England Conservatory. He is a 2:55 marathoner.

B.M., Indiana University in Bloomington. M.M., NEC. Studies with Franco Gulli, Yuval Yaron, and Miriam Fried. Also faculty of Harvard University, where he received a Certificate of Distinction in Teaching from the Derek Bok Center for Teaching and Learning. Former faculty of NEC's Preparatory School.