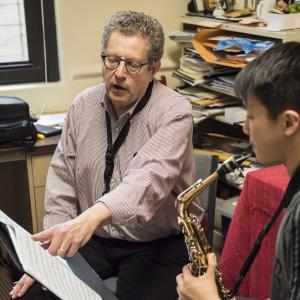 Radnofsky made his Carnegie Hall debut with the New York premiere of Gunther Schuller's Concerto with the National Orchestral Association. Radnofsky also gave the world premiere of Schuller's Concerto with the Pittsburgh Symphony, with both of the highly acclaimed performances conducted by the composer. David Amram's concerto Ode to Lord Buckley is dedicated to Radnofsky, who premiered the work with the Portland Symphony under Bruce Hangen. He has performed on numerous occasions with the Boston Symphony Orchestra, appeared as soloist with the Boston Modern Orchestra Project under Gil Rose (Hovhaness, Olivero, Gandolfi concerti), and performed with the Boston Classical Orchestra under Steven Lipsitt.

Concurrent with his frequent performing and over 30 years of teaching, Radnofsky has designed and implemented a saxophone program for Venezuela with saxophone professor Claudio Dioguardi. He has given masterclasses throughout the U.S. and in Brazil, Israel, China, and Turkey. Radnofsky is committed to outreach internationally, nationally, and locally; his editorial on the topic was published in the Christian Science Monitor. Radnofsky has given literally thousands of outreach performances. They include a teaching component and investment in community to which he is deeply committed. He is President of the Boston Woodwind Society, an organization dedicated to fostering the development of talented young woodwind players, succeeding its founder, the late Matthew Ruggiero, and co-founder, with Michael Couper, of the woodwind music publishing house RCEditions.

Radnofsky is a Selmer artist.