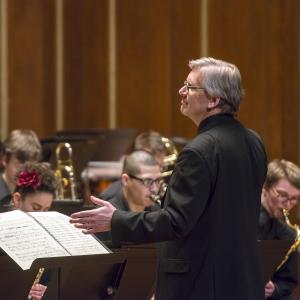 Ken Schaphorst: "Take Back the Country"

A founding member of the Boston-based Jazz Composers Alliance, an organization in the tradition of jazz composer-directed ensembles dedicated to the promotion of new music in the jazz idiom, trumpeter and composer Ken Schaphorst has been awarded Composition Fellowships from the National Endowment for the Arts, the Massachusetts Cultural Council, the Wisconsin Arts Board, and Meet the Composer.

Since coming to NEC as chair of the Jazz Studies department in 2001, Schaphorst has directed the Jazz Orchestra in its performance of new music and traditional big band repertoire. In recent years, the ensemble has performed under the direction of guest artists Django Bates, Jimmy Heath, John Hollenbeck, Jim McNeely and Maria Schneider. Named Best College Big Band in the 2004 Downbeat Student Music Awards, the ensemble has won critical acclaim for its recordings and for its performances throughout the country. Schaphorst also founded NEC's Youth Jazz Orchestra in 2008, one of NEC Prep's offerings for high school students.

Schaphorst’s three-movement Concerto for John Medeski, composed for his friend and fellow NEC alumnus, was commissioned by the National Endowment for the Arts. He has received commissions from the NEA, Marimolin, Orange Then Blue, Boston University, Lawrence University, the Fox Valley Arts Alliance, the Jazz Composers Alliance, the Wisconsin Arts Board, Phi Mu Alpha Sinfonia, Ball State University, and Augustana College.