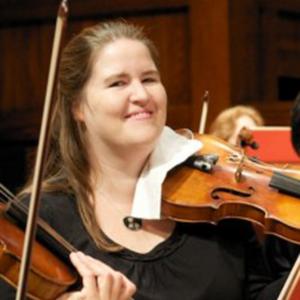 Julia Cash is an active freelance musician and teacher in the Boston area. She has served as principal second and assistant concertmaster of Opera Boston, and she performs regularly with Boston Modern Orchestra Project, Boston Ballet, Pro Arte Chamber Orchestra, Chamber Orchestra of Boston, and as concertmaster of Alea III new music ensemble. She is also an active chamber musician, performing in venues across New England. Other recent performances include guest concertmaster with the Orchestra of the European Union on tour in Boston Symphony Hall last year.

Cash is also an avid teacher and music educator. Along with her private studio, she has taught at schools and festivals throughout the US. She is currently on faculty at New England Conservatory Preparatory School, Boston Latin School, and the Boston Youth Symphony Orchestras. During the summer, Cash teaches at Point CounterPoint Chamber Music Camp in Vermont, where she has served as Music Director of the Prelude Program since its inception in 2010.

During her training, Cash studied and performed extensively in both Europe and the US. She holds degrees from the New England Conservatory of Music, the Staatliche Hochshcule für Musik in Trossingen, Germany, and the Dutch Royal Conservatory of Music in The Hague. Her primary teachers have been James Buswell, Federico Agostini and Vera Beths.  She has attended many world-renowned music festivals, including Accademia Musicale Chigiana, in Siena, Italy, the Conservatoire des Americaines in Fontainbleau, France, Kneisal Hall, the Britt Festival and Musicorda.  As a fellow at Tanglewood Music Festival, she received The National Music Clubs Award for outstanding performers.