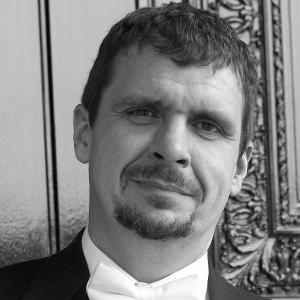 Joseph Damian Foley has been principal trumpet of the Rhode Island Philharmonic since 1990, and was recently appointed Principal Trumpet of the River Oaks Chamber Orchestra of Houston, TX. He has also performed and toured with such prestigious ensembles as the Boston Symphony, Boston Pops, Boston Ballet, the Metropolitan Opera, Royal Ballet of London, and the New York Philharmonic.

A highly sought-after chamber musician, he is a former member of the Atlantic Brass Quintet, which garnered grand prizes at six international competitions during his tenure. He has performed with the Boston Symphony Brass Quintet, the Empire Brass, Burning River Brass, ALEA III, and at the Santa Fe, Buzzard’s Bay, and Newport Chamber Music Festivals.

As a soloist, he has performed with the Boston Pops, the Boston Landmarks Orchestra, the Rhode Island Philharmonic, the Pro Arte Chamber Orchestra, the River Oaks Chamber Orchestra, and at Carnegie’s Weill Recital Hall. Recently he was soloist in the world premiere of the Trumpet Concerto by Harold Shapero. He can be heard on recordings of the Boston Symphony, Boston Modern Orchestra Project, Atlantic Brass, Empire Brass, the Metropolitan Opera Brass and many others. His first solo CD is due out this year.

A clinician for the Vincent Bach Corporation, he has presented master classes at music schools around the world.