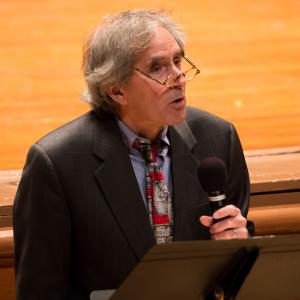 James Klein graduated from Kenyon College summa cum laude with highest honors in English literature and the philosophy of history. As recipient of the American Association of Colleges Oxford Fellowship, he then took a second baccalaureate in modern history from Oxford University, then a master’s in modern history (also from Oxford). He then returned to the United States to complete his education at Harvard University, where he took a second master’s and a doctorate in English history. His dissertation, "Politics and Publicity: A Study of Victorian Conservatism," won Harvard University’s DeWitt Prize in History, given for outstanding contribution to the field of Constitutional Politics.

Since coming to NEC, Klein has written and lectured extensively on late Victorian politics, on political corruption, and on modern electoral reform. He has also coauthored Measure for Measure: A History of New England Conservatory with Bruce McPherson, former chair of the Conservatory’s liberal arts department.

Klein has received numerous National Endowment for the Humanities Fellowships, as well as several awards for teaching excellence, including Who’s Who of American College Faculty and Harvard University’s Fellowship for Outstanding Teaching from the Derek Bok Institute.

After holding positions as assistant dean of freshmen at Harvard College and associate dean of the Extension School at Harvard University, Klein has twice served as dean of students at NEC.