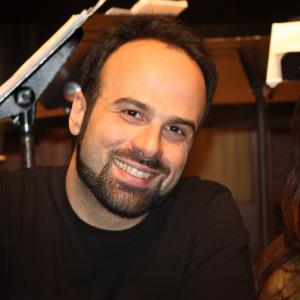 Stratis Minakakis is a composer and conductor whose creative work engages issues of memory, cultural identity, and art as social testimony; it also explores the rich possibilities engendered by the interaction between arts and sciences.

As a composer, he has collaborated with leading performers and ensembles across Europe, North America, and Japan, such as The Crossing choir, the PRISM and Stockholm saxophone quartets, the Harry Partch ensemble, the Arditti String Quartet, Ensemble Counter)induction, Noh actress Ryoko Ayoki, recorder virtuoso Tosiya Suzuki, flutist Orlando Cela, and conductors Donald Nally and Rüdiger Bonn.

Also active in the field of music theory, his recent work focuses on interpretive analysis of the late string quartet manuscripts by Beethoven. This line of work builds upon the pioneering research of violinist Nicholas Kitchen on the expressive markings and articulations of Beethoven manuscripts. Other areas of interest include early Modernism, and the music of Xenakis and Ligeti.

He is the recipient of numerous artistic prizes, grants, and academic awards from institutions such as the Pew Center for Arts and Heritage, Princeton University, the University of Pennsylvania, the New England Conservatory, the Takefu International Festival in Japan, the Fondation Royaumont in France, the Center for Mediterranean Music in Greece, the Greek Composers Union, and the International Society for Contemporary Music. Deeply committed to music pedagogy, he was awarded the Dean’s Award for Distinguished Teaching at the University of Pennsylvania and the prestigious Louis Krasner Award at the New England Conservatory.