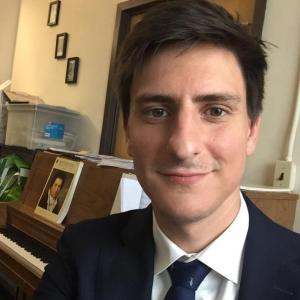 Andrew Schartmann is a composer and music theorist whose work focuses on video game music, Viennese classicism, and music theory pedagogy. In addition to his work at NEC, he serves as Audio Director of Yale’s Play4REAL XR lab, where he crafts music and sound environments for the virtual-realty games, including the award-winning SmokeSCREEN VR (Gold Medal Winner at the 2020 International Serious Play Awards, Forbes Top-50 VR Games of 2019). Prior to joining NEC’s faculty, he served as an affiliate faculty member at Yale's Center for Collaborative Arts and Media. He has taught courses on tonal harmony, counterpoint, musical form, composition, musicianship, Beethoven’s piano sonatas, and video game music.

Schartmann is the author of two books, including Koji Kondo’s Super Mario Bros. Soundtrack (2015), which The New Yorker praised for its “overwhelming precision.” His third book, forthcoming from Bloomsbury, investigates Keiji Inafune’s role in establishing some of the gaming industry’s foundational design principles. A fourth book, entitled The Illusion of Variety: Analysing Music for the Nintendo Entertainment System, is currently under contract. Schartmann’s essays for popular press has appeared in Slate, Bandcamp, Frieze, and Clavier Companion; and his academic work has appeared in Bloomsbury's 33 1/3: The B-Sides, Journal of Popular Music, The Routledge Companion to Music Theory Pedagogy, The Journal of Sound and Music in Games, and Addictive Behaviors.

In 2022, Schartmann worked with CBC’s Ben Edwards on a radio piece to celebrate Koji Kondo’s contributions to game sound. And in 2016, he worked with the BBC on the documentary While My Guitar Gently Bleeps, which traces the influence of retro video game sound on modern-day popular culture. Schartmann is the Associate Editor of DSCH Journal—a biannual publication devoted to the life and work of Russian composer Dmitri Shostakovich—and serves as a board member of the Journal of Sound and Music in Games. In 2019, he was elected Treasurer of the New England Conference of Music Theorists.