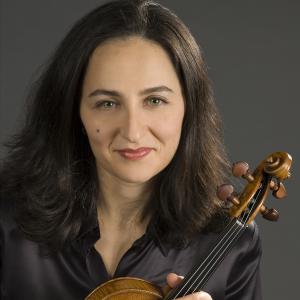 Russian born violinist Anait Arutunian has established herself as both a dedicated teacher and active performer. Winner of the 2000 Artists International Auditions in New York, Anait performed solo and chamber music concerts at such venues as Moscow Conservatory Recital Hall, Weill Recital Hall at the Carnegie Hall and Alice Tully Hall among others. She appeared as soloist with the New York Pro Arte Orchestra and the Manchester Chamber Players. Numerous chamber music performances have taken her throughout the United States as well as Spain, Russia, Italy and Venezuela. She was also heard on WNYC Radio.

Recipient of 2020 Clara Slater Award for excellence in teaching, Anait Arutunian has been on faculty of the New England Preparatory School since 2001. Among her students are winners of Connecticut International Competition, New England String Ensemble concerto competition, Boston Youth Symphony concerto competition and ASTA competition. Many went on to study at major conservatories such as Juilliard School, Cleveland Institute of Music and Peabody Institute.

Her students have also been featured on the nationally broadcasted show "From the Top."

Anait Arutunian holds her Bachelor’s and Master’s degrees from The Manhattan School of Music in New York.