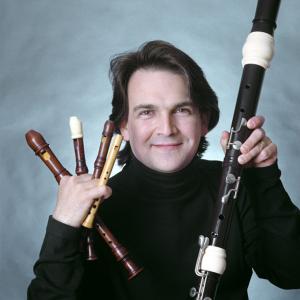 Aldo Abreu has taken the recorder and its repertoire to many prestigious venues throughout the United States, Europe, New Zealand, Australia, and his native Venezuela. Since winning First Prize at the 1992 Concert Artists Guild Competition, Mr. Abreu has been heard in recital at the Ambassador Auditorium in Los Angeles, the Gardner Museum in Boston, Northwestern University’s Pick-Staiger Hall in Chicago, Spivey Concert Hall in Atlanta, and the Metropolitan Museum of Art and Weill Recital Hall at Carnegie Hall in New York.

Laureate of the Premio Flauto Dolce (Germany) and the Concours Musica Antiqua (Belgium), Mr. Abreu has been featured in many festivals including Spoleto, OK Mozart, Boston Early Music Festival and Recorder 200 in Australia. He has been a concerto soloist with Solisti New York, the Handel and Haydn Society, Boston Baroque the West Shore Symphony, the Illinois Chamber Symphony, the Savannah Symphony, the Billings Symphony, and the Dubuque Symphony Orchestra.

Mr. Abreu frequently performs contemporary works for the recorder. Among them, The Kid from Venezuela by composer Pete Rose, Echoes and Shadows by Christopher Cook, Concerto for Recorder and Orchestra, commissioned from Ricardo Lorenz by Concert Artists Guild, and most recently, Concerto for Recorders and Orchestra by Lawrence Weiner, were written for Mr. Abreu. Mr. Abreu has also explored the rich but rarely heard music by Latin American composers of the Baroque and Contemporary periods. Mr. Abreu teaches on the faculties of New England Conservatory, Boston University and Berklee College. Mr. Abreu is on the faculties of New England Conservatory, where he is the chair of the Early Music Department of the NEC Preparatory School, and of the Boston University Historical Performance Department in the College of Fine Arts. In October 2019, Mr. Abreu has been appointed El Sistema Symphonic Ensemble Conductor at the East Somerville Community School.