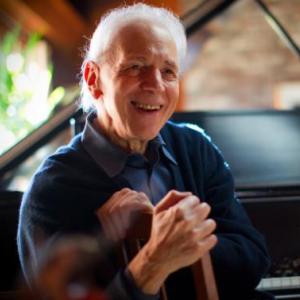 As a Distinguished Artist-in-Residence at NEC, pianist Russell Sherman offers his insights to students through masterclasses, performance seminars, studio classes, and coachings.

An eloquent communicator both on and off the concert stage, one of Boston’s musical treasures, legendary pianist Russell Sherman continues to garner accolades from critics and audiences alike for his grace, imagination, and poetry. The New York Times calls him “one of the best pianists in this or any other country.” As the author of a highly acclaimed book Piano Pieces (a rhapsodic compilation of vignettes and personal anecdotes from Sherman’s life experiences as a pianist and teacher), Russell Sherman has been praised not only as an ingenious virtuoso but also as an insightful master.

In recital, Russell Sherman has appeared on Carnegie Hall’s Keyboard Virtuoso Series, California’s Ambassador Foundation Series, the Distinguished Artists Series at New York’s Tisch Center for the Arts at the 92nd Street Y, and the Bank of Boston Celebrity Series. He has performed at Lincoln Center’s Alice Tully Hall, Sarasota’s Van Wezel Performing Arts Hall, Boston’s Symphony Hall, Isabella Stewart Gardner Museum, Jordan Hall, Columbia University’s Miller Theater, the Metropolitan Museum of Art, and Chicago’s Orchestra Hall. Additionally, he has appeared at the Ravinia Festival, the Hollywood Bowl, the Mostly Mozart Festival, and the Wolf Trap Festival, as well as recitals at Spain’s Santander Festival and Germany’s Ruhr Triennale Festival. In 2010, he collaborated with Mark Morris Dance Group alongside Minsoo Sohn and the Orchestra of Emmanuel Music in the Boston premiere of Mozart Dances, presented by Celebrity Series of Boston.

Sherman is a prolific recording artist. He has recorded the five Beethoven concertos with the Czech Philharmonic and the Monadnock Festival Orchestra, and the complete Beethoven sonatas, recorded as five dual-CD sets (each having been released individually and as a complete set). The entire Beethoven sonatas project has been called “a set for the ages” by Bernard Jacobson in Fanfare. This makes Sherman the first American pianist to have recorded all of the sonatas and concertos of Beethoven. His earlier recording of Liszt’s Transcendental Etudes was critically acclaimed: Anthony Tommasini in a 1999 New York Times piece said,

“Several impressive recordings of Liszt’s Transcendental Etudes prove that these audaciously difficult works are actually playable and triumphantly pianistic. But none make Liszt’s visionary understanding of what the piano could do more palpable and exciting than Russell Sherman’s extraordinary 1990 recording.”

Sherman has also recorded Gershwin’s Piano Concerto in F, Brahms’s Variations on a Theme by Paganini, Op. 35 and Fantasies, Op. 116, Chopin’s 24 Preludes, Op. 28, Schubert’s Sonata in D major, D. 850 and Sonata in B-flat major, D. 960, both Grieg and Schumann concertos, and works by Liszt, including the B minor Sonata, Don Juan Fantasy, and transcriptions. He has also recorded Mozart’s two concertos in minor keys plus solo fantasies with the Orchestra of Emmanuel Music under Craig Smith. Additional recordings include a GM Recording CD, Premieres & Commissions, in which he performs contemporary repertoire by Schoenberg, Schuller, Helps, Perle, and Shapey. Except for Schoenberg’s Six Piano Pieces, he has personally premiered and commissioned all of these works. Sherman’s releases on Avie Records include a CD of Debussy’s Estampes, Images Book II and Préludes Book II, a DVD of his live performance of the Liszt Etudes d’exécution transcendante, and most recently, the complete Chopin Mazurkas. Sherman has also performed and recorded the complete sonatas of Mozart, the Bach English Suites and the complete piano works of Schoenberg.

Russell Sherman was born in 1930 and educated in New York, beginning piano studies at age six. By age eleven, Sherman was studying with Eduard Steuermann, a pupil and friend of Ferruccio Busoni and Arnold Schoenberg. Sherman graduated from Columbia University at age nineteen with a degree in the humanities. He was Visiting Professor at Harvard University and is currently a Distinguished Artist-in-Residence at New England Conservatory. Sherman continues to explore, and to merit the title “a thinking man’s virtuoso.”

Russell Sherman as the featured guest on David Dubal's "For the Love of Music" on WNCN-FM, New York.