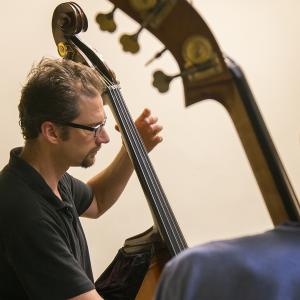 Rick McLaughlin’s work has been heard all over the world. A band leader, side-man, and member of the Grammy-nominated jazz group Either/Orchestra, he has performed on stages and in recording studios in places ranging from greater Boston, MA to Los Angeles, CA; from Barcelona, Spain to Rome, Italy; and from Phuket, Thailand to Addis Ababa, Ethiopia. Over 20 commercially available CDs feature Rick McLaughlin, including his own debut as a leader, Study of Light, which garnered critical acclaim (“…illuminates your aural universe with singleness and sincerity.” – Marcel Polgar, Double Bassist Magazine). He has been heralded by MacArthur Fellow George Russell as “one of my favorite bassists.” Paul Olson, of Allaboutjazz.com, says that McLaughlin is “the most valuable player” on a recent CD release. “Electric and exciting,” wrote Michael Nastos of Cadence Magazine of McLaughlin, a bassist who delivers “firm yet discursive support” according to Bob Blumenthal of the Boston Globe.

Although primarily known as a bassist, McLaughlin has spent much of the past decade teaching aspiring musicians, notably as Assistant Professor of Harmony at Berklee College of Music, and as Assistant Chair of the Jazz Department at the New England Conservatory of Music, School of Preparatory and Continuing Education. These positions capitalize on the work McLaughlin has done in addition to his bass playing, as a published author, composer, and arranger. His publications have been featured throughout the DrumPro series of magazines, where he has written on the relationship between the bass and drums in funk and jazz music. His most recent paper, Which Way Do the Trade Winds Blow? Two Case Studies Examining the Voyage of Jazz to Africa is awaiting publication. Compositions of McLaughlin’s can be heard on Study of Light, for which his arrangement of the second movement of Ravel’s String Quartet is the first of its kind. The current Either/Orchestra CD, Mood Music for Time Travellers, also features McLaughlin’s compositions, one of which, “History Lesson,” appeared on the Jazz/World Music Hot 100 Chart in the fall 2010.

McLaughlin has shared the stage with a wide range of musicians, from jazz luminaries such as Don Byron, Steve Lacy, John Medeski, Danilo Perez, and John Zorn, to rock musicians Willie “Loco” Alexander, Morphine and Peter Wolf, and country music star Roger Miller. A frequent collaborator with musicians from all over the globe, McLaughlin has also performed with Ethiopia’s great singers Mahmoud Ahmed and Alemayhu Eshete, as well as the innovator behind Ethio-­‐‑Jazz, Mulatu Astatke. Collaborations with Ahmed and Astatke were with the Either/Orchestra and have been released on CD and DVD.

McLaughlin graduated from the New England Conservatory of Music in Boston, MA with both B.M. and M.M. degrees, the latter he received with Academic Honors and Distinction in Performance. He is an endorser of AlterEGO instruments, Gallien-­‐‑Krueger amplifiers, and Hohner Melodicas.