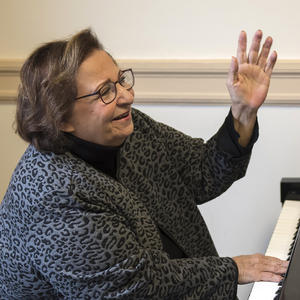 Lorraine Nubar is head of the Juilliard School’s Pre-College voice department, and a member of its faculty since 1978. She has taught at NEC since fall 2003. Nubar studied with Jennie Tourel, serving as her teaching assistant while still a student. She also worked with William Vennard, Daniel Ferro, Martial Singher, Frank Corsaro, Gerard Souzay, Elly Ameling, Jeanine Reiss, and Dalton Baldwin.

Nubar enjoys a long time association with collaborative pianist Dalton Baldwin and conducts annual masterclasses with him at Vermont Opera Theater’s “Foliage Art Song” festival. An established presence in France, Nubar is the first American to be appointed to the voice faculty of the Paris Conservatory. She has prepared singers for the Paris Opera and Lyon Opera and regularly conducts summer masterclasses at the Foundation Royaumont in Val d’Oise, the Centre International de Formation Musicale in Nice and the summer vocal chamber music program at Les Azuriales Opera. Several of Nubar’s students have been honored as Presidential Scholars in the Arts, and have sung at the White House. In demand as an adjudicator, she has been a juror for the Young Concert Artists International competition, the Paris Concours, and the Marseille Concours.