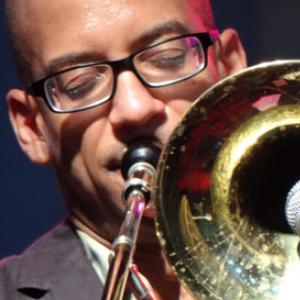 Josh Roseman is a New York based jazz trombonist whose presence has been felt in the downtown scene of improvisers from the 1990s onward.

Born June 5, 1967 in Boston, MA, he picked up the trombone because it was the most prevalent instrument in his household. His father, uncle, and cousins were all musicians. Classical influences informed his playing, but he was also enjoying Motown artists Stevie Wonder and Marvin Gaye, Sly & the Family Stone, Jimi Hendrix, Bob Marley, early ska music (as his mother was from Jamaica) and the Beatles.  Moving to higher education, Roseman stayed close to home, studying at both the Berklee and New England Conservatories.

Arriving in New York City where he was a participant in the early Knitting Factory heyday of the early ’90s, Roseman was acclimated quickly as a co-founder of the acid-jazz dance band the Groove Collective and the less appreciated Giant Step. His most important mentorship was with the late trumpeter Lester Bowie, under whom he honed a refined style and sense of humor.

A quintessential sideman, Roseman has played with Dave Holland, Don Byron, Steve Coleman, Dave Douglas, Jason Moran, the Skatelites, the Roots, John Zorn, Medeski Martin & Wood, Me’Shell NdegeOcello, and the late Lester Bowie, as well as leading his own bands. Roseman is busy aside from staged music, as a trombone instructor and improvisation coach for the New School For Social Research at N.Y.U., the Harlem School for the Arts, and the Banff Centre in Alberta, Canada.