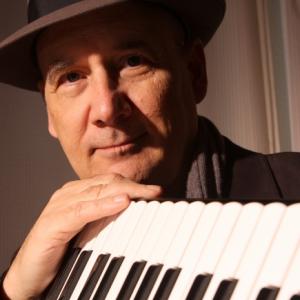 He is the recipient of a 2010 United States Artists Collins Fellowship, an unrestricted $50,000 award given annually to "America's finest artists."

He has premiered over 50 solo accordion pieces, including his own, as well as those he has commissioned from Mary Ellen Childs, William Duckworth, Fred Frith, Aaron Jay Kernis, Jerome Kitzke, Stephen Montague, Somei Satoh, Lois V Vierk, and John Zorn.

His 1987 project, Polka From the Fringe, a collection of commissioned polkas by Fred Frith, Elliott Sharp, Bobby Previte, Carl Finch, et. al., toured around the world and was released on 2 cds on the eva label, and were named “best recordings 1992” on WNYC-FM’s “New Sounds” program.

His music theatre scores include “Chinoiserie” and “Obon” with Ping Chong and Company, “Hard Coal,” with the Bloomsburg Theatre Ensemble, “Industrious Angels” for Laurie McCants, “Cirque Lili” for French circus artist Jérôme Thomas, which has been performed over 250 times world wide, always with live music, and his own piece, “Squeeze Play,” an evening of collaborations with Dan Hurlin, David Dorfman and Dan Froot, Claire Porter, and Mary Ellen Childs. He and Dan Hurlin were awarded, jointly, a BESSIE for, “The Heart of the Andes,” which has played the Henson International Puppetry Festival, The Barbican Center in London, and the Ten Days on the Island Festival, Tasmania.

Klucevsek has released over 20 recordings as soloist/leader on Tzadik, Winter & Winter, innova, Starkland, Review, Intuition, CRI, and XI. Stereo Review cited his Starkland recording, Transylvanian Software, as a recording of special merit" (1995). He can also be heard on John Williams’s orchestral scores for the Steven Spielberg films, “The Terminal,” "Munich," “Indiana Jones and the Kingdom of the Crystal Skull,” and “The Adventures of Tin-Tin,” and on A. R. Rahman’s score for “People Like Us.”