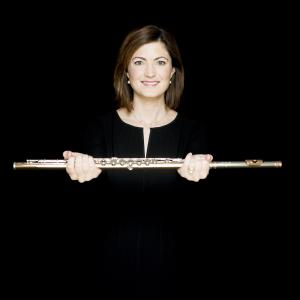 Elizabeth Rowe joined the Boston Symphony Orchestra in 2004 and holds the Walter Piston Principal Flute Chair. Prior to joining the BSO, Rowe held titled positions with the orchestras of Fort Wayne, Baltimore, and Washington, D.C., and was a member of the New World Symphony in Miami Beach, Florida.

Rowe’s more than two dozen solo appearances with the BSO include the American premiere of Elliott Carter’s Flute Concerto; the Ligeti Double Concerto for Flute and Oboe; Gabriela Lena Frank’s Illapa, Tone Poem for Flute and Orchestra; Frank Martin's Concerto for Seven Wind Instruments, Timpani, Percussion and Strings; the Mozart Flute and Harp Concerto; and Mozart’s G major flute concerto. She has also joined violinist Pinchas Zuckerman and her BSO colleagues in performances of Bach’s Brandenburg Concertos Nos. 2 and 5. In the 2017 season she was featured on the BSO’s opening night gala, performing Bernstein’s Halil. That same season, she performed the Mozart Flute and Harp Concerto with the orchestra in Tokyo, Japan and returned to the front of the stage as a soloist at Tanglewood with another performance of Halil. Rowe's other recent solo work includes concerto performances with the Boston Classical Orchestra and the Oregon Mozart Players. She and her colleague John Ferrillo will again perform the Ligeti Double Concerto with the orchestra in May, 2020.

As a member of the Boston Symphony Chamber Players, Rowe can be heard in a wide variety of chamber works throughout the season at NEC’s Jordan Hall, and in several chamber music recordings, including the Grammy-nominated 20th Century French album, Profanes et Sacrées. She can also be heard on a number of BSO recordings, most notably the recently released Grammy-winning recordings of Shostakovich symphonies.

Rowe is noted for her insightful teaching, attracting students from around the country to her lessons and masterclasses. She works with students at both New England Conservatory and the Tanglewood Music Center and is a regular guest instructor at the New World Symphony. She previously taught at both the Peabody Conservatory of Music and the University of Maryland.

Elizabeth Rowe grew up in Eugene, Oregon. She received her Bachelor of Music degree from the University of Southern California, where she was a Trustee Scholar and a student of Jim Walker, former principal flute of the Los Angeles Philharmonic. Rowe’s connection to the Boston Symphony dates back to the summer of 1996, when she was a Tanglewood Music Center Fellow and performed as principal flute under the direction of Seiji Ozawa in the TMC’s fiftieth-anniversary production of Benjamin Britten’s opera Peter Grimes.

Rowe is not accepting students for private study at the New England Conservatory at this time, but she continues to offer an in-depth course on orchestral repertoire for flutists enrolled at the school.