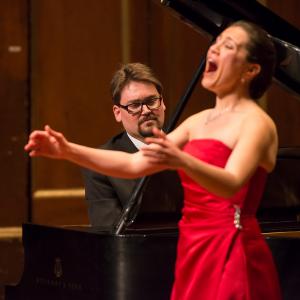 Damien Francoeur-Krzyzek’s teaching and performing career incorporates his unique and diverse background as a pianist, classical singer, linguist, and opera coach. A faculty member of New England Conservatory since 2007, he has also served on the music staff of Opera Theatre of Saint Louis since 2008.

Formerly the Principal Coach of Boston Lyric Opera, he prepared 13 productions for that company over four consecutive seasons, including Dvořák’s Rusalka, for which he served as Czech diction coach. Additionally, Francoeur-Krzyzek has worked as rehearsal pianist for Opera Colorado, and diction coach for Opera Boston’s The Bartered Bride and Béatrice et Bénédict.

In addition to his academic and operatic duties, Francoeur-Krzyzek has privately coached professional singers for roles at national and international opera companies. He has studied and coached more than a dozen languages to date, including Russian, Dutch, Catalan, and Polish. An active performer, Francoeur-Krzyzek collaborates regularly with vocalists and instrumentalists throughout New England.